Today we might have listened to Luke’s account of Jesus’ resurrection. If we had followed that reading we would have heard Luke’s repetition of the heavenly presences that tradition said accompanied the birth and triumph of Roman potentates. He turned on its head the imagery of Roman imperial power to explain that Jesus, ‘King of the Jews’ gave dignity to women, to those with no political power, even to those condemned to death with him. He pointed to the rule-of-God within, which shapes our daily living.

Luke traced the powerful cross-references to that story in his chapter 23 and further into the Book of Acts. Luke’s fascination with the role of women and the underprivileged was a consistent aspect of his writing.

I chose instead to read John’s record of Easter. Essentially the two stories draw a similar conclusion about the events of crucifixion and empty tomb. It is when you check both simultaneously that their radical difference in understanding of these events becomes so apparent. You realise that early Christianity brought a varied imagination as well as a varied interpretation to an understanding of ‘resurrection’. It sensed God in different phases.

It is not my intention to labour the details of difference. To demand consistency is to lose variety. Every time someone requires our conformity, we know its pain. Each of us needs the respect of seeing life differently. We may change our opinions and move to some new understanding – but give us time and give us respect. We know that we will meet both God and neighbour in different guises.

I am suggesting here that you treat the Bible stories the same way. They are part of a recounting of the drama of human existence over two millennia. They assume communities separated by time and history and draw on myths reaching into prehistoric times. The Gospel accounts are a latter-day fragment of the drama of life and death. They form part of an ancient text describing the raw savagery of life, yet reaching beyond laws that controlled its most minute detail. Nothing less than the evolving God is on view here.

Many of our ancient forebears sensed the impress of the supernatural on their everyday world. Why should this surprise us? Most of us read their stories as naturalists; the supernatural rarely enters our reflection. Occasionally we suggest miracles where we lack evidence, but even there we hold judgment.

Sufficient conversation with contemporary audiences suggests that they also do not translate everyday experience as miracles. Most of us live with a God and a religion that like us is evolving from a primitive past.

The last thing we need is a consistent Bible. Instead, the Bible stories with all their difference awaken us to a destiny shared with past generations. We search for an inner awareness, for a sense of human dignity and social conscience.

The same urgency moved the Gospel writers. Beyond the record of some factual material and some shared tradition, they opened the events to speculation and imagination. Read the texts for yourselves; where possible parallel them so you can see the differences. Why did Mark end without a resurrection story? Why did Luke drive his stories with such strong socio-political ends? Why did John effectively interpret the resurrection of Jesus as our rising into the presence of God?

When it comes to meaning, these accounts have no consistency. People like us, driven by the necessity of change, must surely understand this. We live as much by our imagination, as by our interchange of ideas and our sense that we are evolving as people captivated by wonder. The past can offer us stories of human encounter where we can identify with many of its mystical moments of insight.

Something about Jesus’ death and the empty tomb captured the imagination of the biblical writers and the early Christian followers. Their stories were selective; they mostly glossed over the graphic and gruesome aspects of crucifixion. They were less interested in those details than they were in offering an understanding of what they might mean. In different ways they wanted bring us into the mystery of the human psyche and their own evolving sense of God. They explored as best they were able the tragedy of death and the passion of a love that can transform.

John, whose account is the background of today’s address, brings us also to the tomb of Jesus. There, quite distinctively, he invites us to journey with Mary Magdalene through a conversation with someone she supposed to be the gardener. Only gently do we realise that this story is about ‘a different way of seeing’. Mary Magdalene had already featured in John’s Gospel. In that earlier account she touched Jesus, wept at this feet and dried his feet with her hair. Body touching body, she knew the meaning of self-giving love.

This text also is about that relationship between Mary and Jesus. For this moment Jesus asked Mary not to touch him. She could no longer hold onto him. We all know this poignancy when death has invaded our lives or when separation of a relationship has taken place. What we most long for is taken away from us. We cherish the memory of touch. That memory holds the sense of belonging with someone and with that belonging a profound sense of longing for them.

A little further in this chapter of John, Thomas with all his doubts was urged to touch Jesus. What we have here then is not a theological conundrum about the nature of the resurrection body. It is rather a conversation about the passion of human relationship. In her moment of meeting, Mary knew deep within herself that she was able to see into – that is engage with – the heart of the other. And that is where each of us meets our deepest yearning. Even so, what Thomas might hold, she must let go.

We have only imprecise words to describe these emotions. Our religious short-hand terms compress our differing beliefs and experiences into common words like crucifixion, resurrection and ascension. Each of us must make what we can of these words. We should not be surprised that the early church lacked agreement about their meaning. They are more than theological confinements; they are passion words about loving, touching, losing, hoping, changing and transforming. They are a sense of God in daily encounter. They hold within them the passion of holding and containing and the liberation of letting go.

Each person in this audience will bring a different understanding of what Easter means to them. For some, today may be a literal celebration of the dying and rising of your God. For others, today may be more about community. Whatever the differences we can share a common conviction that Easter is about learning to die to old attitudes, old values, old bigotries, old restrictions, old limitations. Easter can be about transformation where we rethink the values and beliefs by which we live. And that is our moment for letting go of the past.

St Paul who carried the resurrection story to the centre of each message summarised its meaning; we learn to die to self and to rise to newness of life. Face your failings and, in the genuineness of touch and the encounter with others, sense beauty and possibility in yourself and them. The relationship face-to-face may in fact be an engagement with the God who has evolved with our imagination.

When I was a ten-year-old child two stones came into my possession. Apart from memories they are all I have left of childhood. An opal encases one stone; I found it on a footpath at the end of lonely ride from Norton Street Leichhardt to White Bay. To this very day, it has always been either beside my bed or close by my study desk. It has awakened in me a sense of beauty where I never expected to find it. I meet this every day in people and places – all I need to do is open my eyes, allow my imagination scope to embrace, then savour the wonder of discovery and relationship. And in every instance the challenge is to know when it is time to let go of self-concern and open myself to fresh possibilities.

The other rock came from a relative who had been a gold assayist in Kalgoorlie at the turn of the twentieth century. The rock fills my hand and all its edges are rough. On the underside is the merest hint of gold. I have resisted the temptation to smash it open in the hope of finding its golden centre. To this very day, it has always been either beside my bed or close by my study desk. It has awakened in me a sense of hidden beauty and human possibility. I meet this every day in people and places – all I need to do is live with hope and allow my and other’s dreams of beauty to grow and transform me. And in every instance the challenge is to know when it is time to let go of self-concern and open myself to fresh possibilities.

Sin and sacrifice are human realities: they are the tragedies we bear. Well-intentioned people used to ask me if I told street girls that they were sinners: but that was something they knew as well as we do. We know the things we have done wrong and we live their consequences. We need to hear the resurrection truth: ‘you are forgiven; you are accepted and acceptable’.

Sin and sacrifice are only ever the beginning of a story not its ending. We live with the hope and promise of transformation where the rough edges and the inner hardness can yield to the wonder of discovery and relationship. Easter is the celebration of acceptance where we learn to let go of old prejudices, old beliefs, old bigotries and the long hatreds that have marred generations.

God is the touch of love, the meeting of body to body, the wonder that awakens conversation: God is the awesome unveiling of beauty. The Bible is most personally engaging and spiritually insightful when its moments of wonder lift our thoughts from God as the name of someone to God at the point of connection. Hold this slogan in your thoughts: ‘God is not a noun, but a verb’ (maybe check out Exodus chapter 3 and verses 13-15). Now, meet God within Self and in the embrace of friend and stranger. Live with each other the resurrection message of letting go what hinders you. Take a journey that no longer holds you to past loss and tragedy.

All this is the essence of the Easter story. You can catch it again in a single sentence from the Bhagavad-Gita: God is ‘the Self … seated in the hearts of all creatures … the beginning, the middle and the end of all beings’ (chapter 10, verse 20). Love and passion are the goal of the awakened life and are the heart of Easter.

A Meditation Homily based on portion of the Gospel reading for Easter Sunday, John’s Gospel chapter 20, verses 11-18. The address was offered during both Services held at St George’s Church, Paddington, NSW, 31 March 2013.

The morning Intercession ‘See, know, love: The different way’ followed immediately after this Easter Day address. You can find it in Kathy Galloway, Talking to the Bones: Prayers, Poems and Meditations, London: SPCK, 1996, pp. 110-112. The book is available with free shipping from AbeBooks.com for US$10.95. 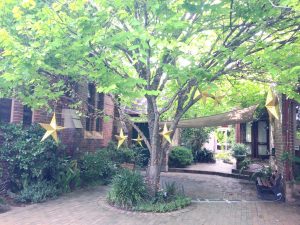